I’m a little behind on posting so am going to be doing some catching up today (8/24). This was the bag from 2 weeks ago. The nectarines were amazing. They took a couple days to ripen, but after about 3 days, they were perfect. 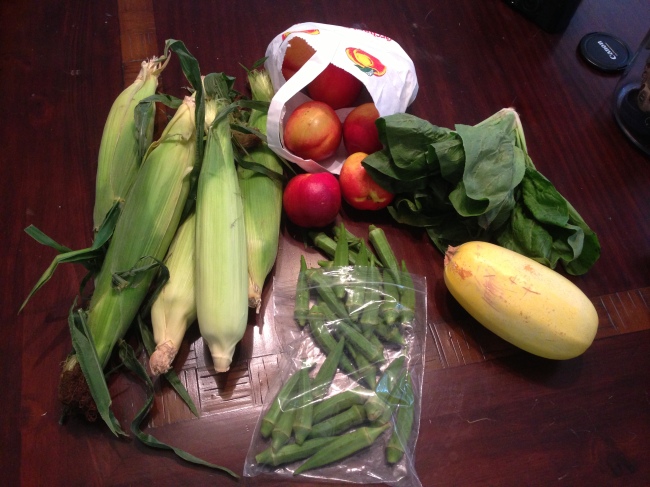 I used the corn in a tomato, corn, and spring onion crostata. It was good. The recipe came from Smitten Kitchen. I used the mascarpone-paremesan crust that I made a few weeks ago in the swiss chard and ricotta crostata instead of the one that she recommended in the original recipe. As anticipated, and likely because it contained cheese, it was delicious. The spring onions actually had a really strong flavor, so the crostata was pretty sharp. It was good, but that surprised me.

I actually still have the okra but am planning to make dry fried okra Indian-style. I love okra that way but have never actually prepared it. We’ll see how that experiment turns out.

I also still haven’t used the spaghetti squash. Last time I had one, I just baked it and then added olive oil and parmesan. It was fine, but wasn’t my favorite. I think I’ll look for some other recipes. I found a recipe for spaghetti squash jam that looks intriguing.

The greens were radicchio greens. To be honest, I can’t remember what they tasted like. I hadn’t realized any part of radicchio wasn’t purple/red, so that was an interested discovery.